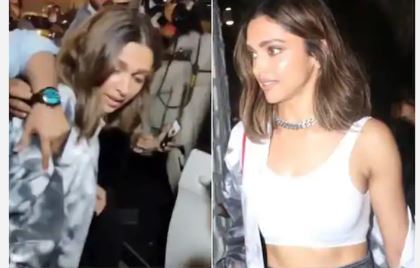 While social media users condemned those mobbing Deepika Padukone, they were quick to notice that she wasn’t wearing a mask during her public outing.

Sanjhi Soch buero :Bollywood actress Deepika Padukone was spotted in Mumbai after a shoot. Dressed in ripped black denim and a matching jacket, the actress rocked the casuals with much grace. On her way to her car, the actress was mobbed by a swarm of fans stationed outside the venue. Someone also caught the sling of her bag and tried pulling it before the actress’ security personnel weighed in. Videos of the incident are already doing on social media.

While social media users condemned those mobbing the actress, they were quick to notice that Deepika wasn’t wearing a mask despite strict advisory shared by the Maharashtra government amid rising COVID-19 cases in the state.

“Media hounding her like dogs and people snatching her thousand dollar worth bag to sell a tissue? Maharashtra contemplating lockdowns, no one wearing masks, no distancing. Are people even sane? EVERYTHING IS JUST BEYOND WRONG WITH THE VIDEO,” a user commented on the video.

Another wrote: “What sort of security is this, She only went from the door to the car n people were throwing them selves on her n pulling her bag very poor security.”

“Are ye Kaisa social distancing behaviour hai? Neither the celebs are promoting the right behaviour by wearing masks nor the media by jumping on each other and then we blame the Government for not doing enough to curb this pandemic,” said a third user.

On the work front, the actress has a busy year ahead. She will be seen in Shakun Batra’s upcoming yet-untitled film that also stars Siddhant Chaturvedi and Ananya Panday.

On the work front, the actress has a busy year ahead. She will be seen in Shakun Batra’s upcoming yet-untitled film that also stars Siddhant Chaturvedi and Ananya Panday.