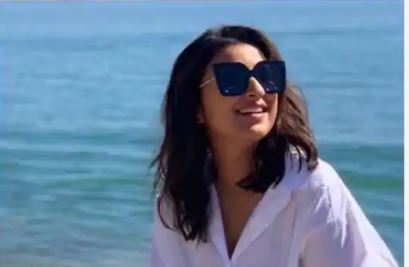 Parineeti Chopra is experimenting with her character in the new Netflix film The Girl on the Train. She talks about the expectations and challenges.

Sanjhi Soch buero :Parineeti Chopra has shed her bubbly girl image for director Ribhu Dasgupta’s psychological thriller The Girl on the Train. She talks about Dasgupta’s shooting technique and the audience expectations.

“I really liked the style of single take and steady camera shots. The uncut vibes reminded me of stage plays. But it’s a little more technical than that, like you have been given marks and you have to be aware of all the instructions,” said Parineeti.

It seems Parineeti prefers planned shoots than the spontaneous ones. “I am a very nerdy person, so I like to know things. If there are 30 focus marks and 80 dialogues then it excites me. And we have done pretty long ones here,” she said.

Breaking out of an established image is tough in Bollywood. Parineeti said, “I am glad that the makers thought I could do something different than what they have seen of me on screen. This doesn’t usually happen with actors because they have been seen in different roles. I wanted people to see a new side of me. I wanted to shock them.”

She added, “The reaction to the trailer is very encouraging. Now when people have started to call and tell us about their anticipation, it has started seeming very real. It’s almost scary in a good way. It feels like I am delivering a baby. I am that much invested in the character.”

Dealing with the hype and expectations can sometimes be difficult. She smilingly said, “If there is no expectation from an actor then it’s a scary situation to be in.”