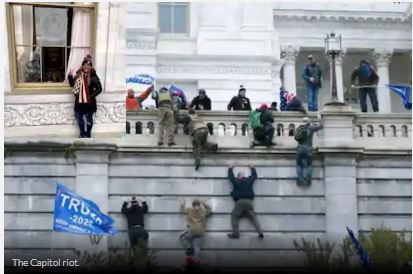 The acting US Capitol Police Chief Yogananda Pittman faced a tough grilling from its members over the security failures that led to a slow response to the deadly riot.

Sanjhi Soch buero :There is no evidence that race played a role in the US Capitol Police’s failure to bolster security before the January 6 insurrection, the department’s top official told Congress on Thursday, as lawmakers sound the alarm over the threat posed by White supremacy and domestic terrorism.

Appearing before a House appropriations subcommittee, acting US Capitol Police Chief Yogananda Pittman faced a tough grilling from its members over the security failures that led to a slow response to the deadly riot, with Democratic Rep. Katherine Clark asking her, “Do you believe (White supremacy) played a role in the discrepancy between the intelligence received, the assessment of the likelihood of violence, and the preparation that left our officers, really, at the mercy of the mob?”

“So, as the first Black and female chief of this department, I take any allegation of inequitable policing extremely seriously,” Pittman replied. “With that said, I have no evidence whatsoever that suggests that there was any discrepancy based on our security posture and as it relates to making enhancements or not based upon race.”

The comments from Pittman, who took over the department following last month’s riot, come as lawmakers begin to investigate the attack and the government’s failure to both prepare adequately for it and respond to it in real-time. Many lawmakers and law enforcement experts have said police may have taken the threats more seriously, and responded more aggressively, if the crowd was comprised of Black rioters, instead of the scores of White people who actually participated in it.